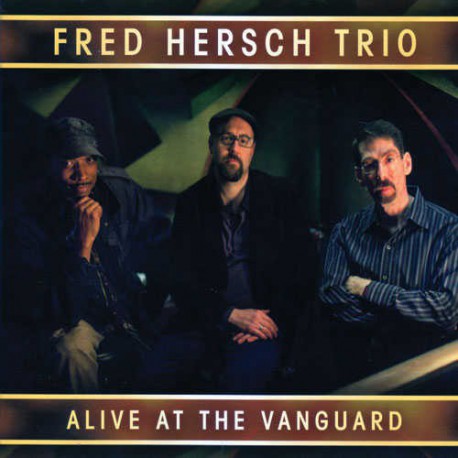 Alive at the Vanguard

Alive at the Vanguard

A new piano trio recording by five-time Grammy nominee Fred Hersch offers the rare opportunity to recalibrate expectations about the most fundamental of all jazz settings. Captured in the heat of creative ferment at the Village Vanguard, the sanctified venue that has long served as the pianist’s second home, Hersch’s trio with bassist John Hébert and drummer Eric McPherson displays all the rhythmic daring, preternatural interplay, harmonic sophistication and passionate lyricism that makes it one of the era’s definitive ensembles. The double album features a diverse array of seven scintillating new Hersch originals, four American Songbook gems, and seven classic jazz tunes. Reviewing the trio the week of the recording, The New York Times’ Nate Chinen referred to the group’s “stronger sense of itself.”
“This may be my best trio playing on record, in terms of range, sound, being in the moment, and the way we play together,” says Hersch. “Not that I disown any of my former albums, but considering where I was three to four years ago, this is very strong, focused playing. And sonically I think it really captures the Vanguard. It sounds different than a studio album, and it should sound different, so you feel like you’re there.”