You Better Beleive It - Moment of Truth (FSRCD 759) 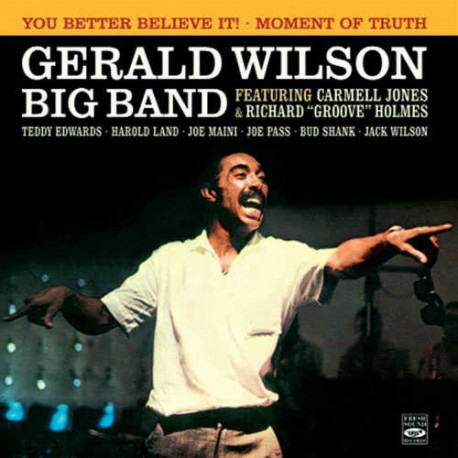 You Better Beleive It - Moment of Truth

You Better Beleive It - Moment of Truth

Composer, arranger and trumpeter Gerald Wilson has recorded big band albums of extraordinarily consistent brilliance throughout his remarkable and enormously long career. And those he made in the 1960s represent one of several peaks. On both You Better Believe It! and its worthy follow-up Moment of Truth, Wilson’s writing is personal and uncluttered; he resists the temptation to deploy all his forces at once, building logically to climactic tutti passages, dealing mostly with blues and groovy originals. The orchestra, made up of top West Coast men, generates a strong drive, plays cleanly and precisely, and was blessed with fine soloists. Holmes is impressive with a big band shouting behind and around him. Carmell Jones, who is also heavily featured, shows he was a thinking young musician. But as good as them were Teddy Edwards, Walter Benton, Harold Land, Joe Maini, Jack Wilson, and guitarist Joe Pass, who plays stunningly in every one of his featured segments. Amid this wealth of jazz talent, though, Wilson’s writing, particularly on Moment of Truth, remains the star of the show, with a harmonic sophistication that is never exercised at the expense of jazz virtues like groove, drive and swing.

GERALD WILSON, leader, arranger,conductor & trumpet on all tracks, with:

Recorded at Pacific Enterprises Inc./Rex Studios, Los Angeles, on May 23, 1962