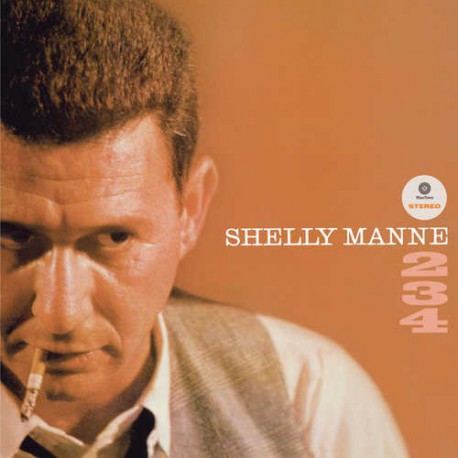 Notify me when available
MANNE IN AN IMPRESSIVE COLLECTIOM OF DUETS, TRIOS AND QUARTETS
WITH COLEMAN HAWKINS AND EDDIE COSTA

INCLUDES 1 BONUS TRACK
2-3-4 was an atypical LP even for someone as given to experimentation as drummer Shelly Manne (1920-1984). As its title clearly indicates, this 1962 album consists of duets, trios and quartets. Duets with drums as one of the two instruments are very unusual, especially for this time period. However, this wasn’t Manne’s first experience in a duet setting. Between August and December of 1961 he had recorded one entire duet LP with an instrumentation of drums and guitar (along with Jack Marshall; the LP was titled Sounds Unheard of!).
The Impulse LP 2-3-4 was Shelly Manne’s last recording with the great Coleman Hawkins (1904-1969), but not his only one. A much younger Manne had cut a couple of sessions for Signature under the saxophonist’s leadership in 1943 (one of them in a quartet format), as well as another one for Victor in 1946. In 1949, both musicians were members of Norman Granz’s Jazz at the Philharmonic, and a single live set presenting them along with trumpeter Fats Navarro, pianist Hank Jones (also the pianist on the 1962 2-3-4 session), and bassist Ray Brown was fortunately recorded at New York’s Carnegie Hall, on February 11, 1949. That would mark Manne and Hawkins’ second to last preserved collaboration, followed by the album presented here.

5 STARS DOWN BEAT original review: “The participants on this set aren’t usually thought of as members of the same “school”, but they combine to produce one of the most varied and aesthetically satisfying LPs of the year. Three different groups are presented, and each track has much to recommend it. Anyone should enjoy this album immensely.” (Harvey Pekar)
PERSONNEL:

SHELLY MANNE, drums on all tracks, plus:

*BONUS TRACK: From the same sessions. Not on the original LP.