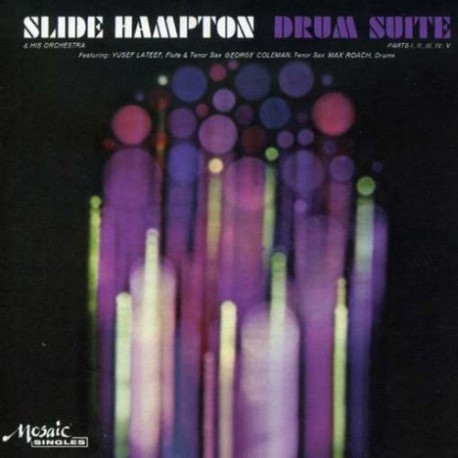 After two high-profile years (1957-59) with Maynard Ferguson as trombonist and key arranger/composer. Slide Hampton struck off on his own as the leader of his own ingeniously conceived octet. While the octet never got off the ground commercially, it was a major creative force in New York for three years, recording for Atlantic among other labels.

In April 1962, Slide was given the opportunity to record one album for Columbia's Epic label. The result was Drum Suite, on which Slide brought in guest artists Freddie Hubbard, Yusef Lateef, Tommy Flanagan and Max Roach. Lost in the shuffle of major label business, this album offered some of Slide's best writing, much of which was specifically written for Lateef and Roach.

We have resurrected this crown jewel in Hampton's woefully neglected octet discography and remixed it adding two additional tunes. Slide's arranging reverberates through the discogrophies of Ferguson, Dizzy Gillespie, Dexter Gordon and so many more, but it was when he was writing for himself that he reached his peak.

Recorded at Columbia Studio A, New York City in April 1962.