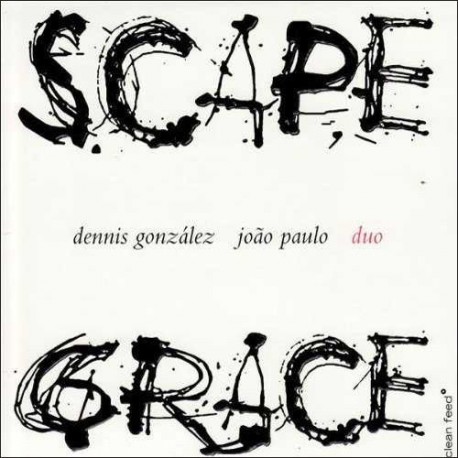 This music is the result of an encounter between two great musicians living in two very distant parts of the world:
Texan trumpeter/cornetist Dennis González and Portuguese pianist João Paulo Esteves da Silva
had never met before this recording session (and then just a couple of concerts in Portugal to prepare for it). They weren't even much aware of each others' musical projects – only the jazz format and the practice of improvisation could enable such a meeting to take place, and the resulting CD is a wonder of musicality, togetherness and joy.
The fact that their respective activities developed away from the principal centers where the music “happens” is sufficient explanation for the reasons that they're not widely recognized as the masters they really are, but that circumstance also explains the individualistic voices they present to us.

González has played with legends such as Famoudou Don Moye, Charles Brackeen, Reggie Workman, John Purcell, Oliver Lake, and Malachi Favors, and that says much about his profile.

A virtuoso on the piano, Esteves da Silva is an undeniable figure in his country, with standing requests coming from artists from genres other than jazz.

In duo, González and João Paulo play a delicate, beautiful music full of spirituality, nuance and drive, with roots in the post-bop tradition but free flowing and universal in dimension.
Something very, very special...