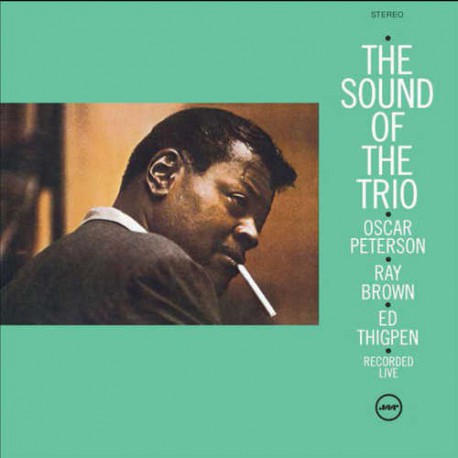 The Sound of the Trio

The Sound of the Trio

Chicago’s London House was a sophisticated supper club in the center of Chicago’s Loop, on the corner of Wacker Boulevard and Michigan Avenue (it disappeared in 1973). According to Oscar Peterson it had “European trappings, chandeliers and the like. When I first started playing there, it also had one of the noisiest audiences in the world. We used to play the London House for two weeks or better, and we had a little apartment hotel near there and we had a chance to do a lot of rehearsing. We used to hold rehearsals after the club closed at night. The last weekend set was very late. We’d finish at 3:15 or 3:30 and we’d wait for everybody to clear out, then we’d have rehearsal until around 6:30 or 7:00 in the morning, until we were tired”. Owned by the brothers George Oscar Marienthal, the legendary Oscar Peterson Trio recorded almost ten-hours of music there between July 11 and August 6, 1961. The Sound of the Trio (Verve V6-8480) was the second of four LPs culled from those dates. The trio’s Londo House repertory is vast and showcases the group’s extraordinary versatility, performing songs ranging from traditional tunes to classic standards and show tunes. More impressive still, the variety of moods and colors present throughout these live recordings is a testimony to the trio’s wide range of experience and complete mastery of technique and feel at all tempos. Peterson’s explosive pyrotechnics, indomitable swing feel and perennial elegance are perfectly complemented by the incomparable bass and drums tandem of Ray Brown and Ed Thigpen. The delightful arrangements showcase the talents of each musician, and provide a framework for the band’s true strength as a cohesive unit of musical masters who share a chemistry that often borders on the supernatural.

BONUS TRACK: From the same sessions, but not included on the original LP. This is a different version of “Billy Boy” than the one appearing on The Trio: Live from Chicago.