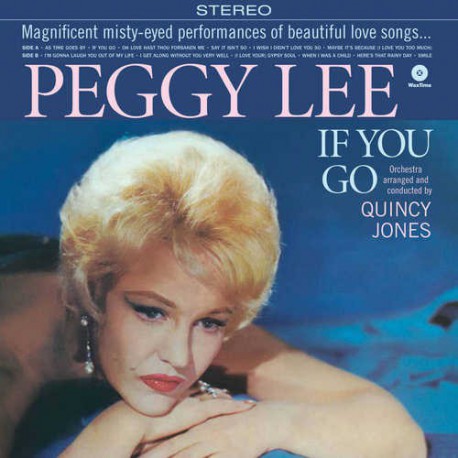 From the onset of her career, Peggy Lee (May 26, 1920-January 21, 2002) forged a sophisticated persona, evolving into a multi-faceted artist and performer. She wrote music for films, acted, and created conceptual record albums –encompassing poetry, jazz, chamber pop, and art songs. This edition compiles a classic Peggy Lee album recorded with the Quincy Jones orchestra in 1961. Jones’ arrangements are featured prominently throughout the LP, titled If You Go (Capitol ST1630). The singer and arranger had recorded together a previous album, Blues Cross Country (Capitol ST1671), in April-May of that same year. After the marvelous work reissued here they would only participate on a short 1966 session (consisting of three songs) which never appeared on LP and was only issued several decades later (it was taped in Hollywood on May 21, 1966 and included the songs “Happy Feet”, “The Shining Sea” and “Stay With Me”). If You Go is a conceptual LP, presenting songs about lost loves.

*Bonus tracks: From the same sessions but not included on the original LP.

B2 & B6: Same as above except Justin Gordon, Ted Nash, Benny Carter,
Al Hendrickson and Shelly Manne out
Hollywood, June 27, 1961.