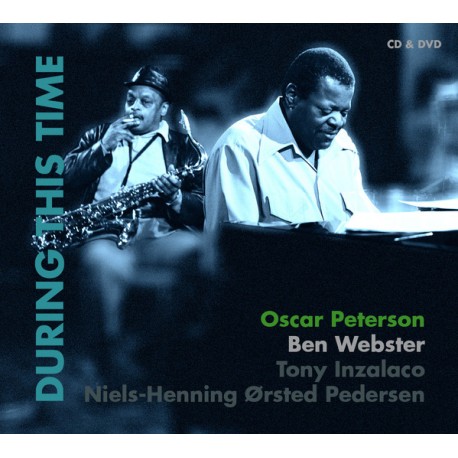 During This Time - Cd + Dvd

During This Time - Cd + Dvd

This outstanding and previously unreleased performance from 1972 features virtuoso pianist Oscar Peterson with tenor saxophonist Ben Webster. Recorded in concert in Hannover, this CD, and DVD package is a delight for ears and eyes via excellent sound quality and sensitive camera work.

Ben Webster's playing, tough and tender in equal measures, originally came to the fore in Duke Ellington's orchestra of the 1930s and 40s. Oscar Peterson's career began after this period but really took off under the wing of impresario Norman Granz when he developed a reputation as perhaps the most technically accomplished and melodically inventive pianists of that time. Webster and Peterson would later cross paths on many occasions, either as members of Granz's Jazz at the Philharmonic troupe or on a number of outstanding recording sessions for the Verve label.

Despite this reunion at Hannover being of later vintage, it's Webster's time with Ellington that is accentuated in the repertoire. Five of the tunes performed that night relate to the maestro including, for example, "Cotton Tail", "Perdido" and "In a Mellow Tone". Also featured are two ballads highlighting the saxophonist's softer and sometimes lightly whispered sound together with harder swinging tracks penned by Webster himself.

Bonus Track (Audio Only)
09. In A Mellow Tone