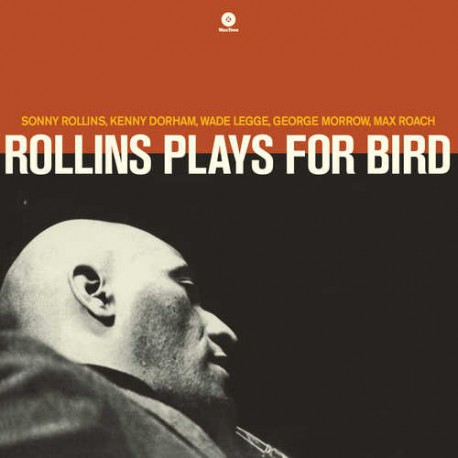 01. MEDLEY
- I REMEMBER YOU
- MY MELANCHOLY BABY
- OLD FOLKS
- THEY CAN’T TAKE THAT AWAY FROM ME
- JUST FRIENDS
- MY LITTLE SUEDE SHOES
- STAR EYES

*BONUS TRACK: From the same session. Not on the original LP.

Sonny Rollins had already been a regular member of the celebrated Max Roach-
Clifford Brown Quintet for half a year when he entered the studio on June 22, 1956 to record Saxophone Colossus, one of his most acclaimed albums as a leader. (This also explains the presence of Roach on the aforementioned LP.) Four days later, however, that group would no longer exist. On June 26 both Clifford Brown and the band’s pianist Ritchie Powell were killed in a tragic car accident. Age 26, Rollins was already a well-known jazz figure by that time. He had recorded some albums as a leader but, above all, he had been part of one of the most outstanding combos of the period: the Miles Davis Quintet. Rollins Plays for Bird was Sonny’s homage to another genius who passed away before his time (Charlie Parker died aged 34 on March 12, 1955). Taped in October of 1956, Sonny was accompanied again by Roach, along with the Brown-Roach Quintet’s original bassist, George Morrow.

Trumpeter Kenny Dorham had already been hired as Clifford Brown’s replacement in Roach’s group when Rollins’ session was recorded. According to All Music Guide critic Michael G. Nastos, “As the tenor sax is not in the same key as an alto, Sonny Rollins would have to transpose a lot of music to take a tribute to Charlie Parker to a high level. Instead he has chosen standards associated with Parker, and recorded them within a year after Bird’s passing.

This idea poses some peculiar challenges, added on to the fact that the quintet of Rollins starts the proceedings with a 27-minute medley of seven tunes seamlessly stitched together. Pianist Wade Legge, an unsung hero of jazz in the ‘50s for sure, plays some wonderful music here, and laces the grooves of the tunes together, while bassist George Morrow and the always exceptional drummer Max Roach keep things moving forward. Even more unusual is that trumpeter Kenny Dorham is in many instances invisible on the date, playing less than a cursory role to Rollins. Dorham rarely plays together with him, and is much more separate than equal, which in many regards is a shame. The music certainly has its moments, as on the inexhaustible medley. Even for the
heartiest fans, this long-winded exercise might prove taxing. Rollins does the ballad ‘I’ve Grown Accustomed to Her Face’, and the horns finally play together for the nearly 12-minute cool waltz ‘Kids Know’.” “The House I Live in”, which completed the session but wasn’t included on the original LP, has been added here as a bonus.