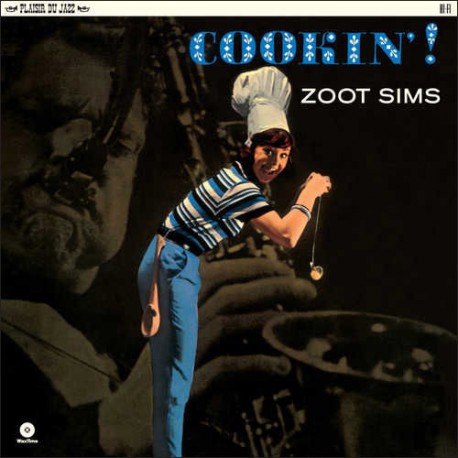 * BONUS TRACK: From the same concert, but not included on the original LP.

This release contains a complete live performance recorded in London at the celebrated Ronnie Scott’s Club in late 1961 by the superb tenor saxophonist Zoot Sims. Ronnie Scott’s Jazz Club opened on October 30, 1959 in a basement at 39 Gerrard Street in London’s Soho district, before later moving to a larger venue nearby at 47 Frith Street in 1965. The original venue continued in operation as the “Old Place” until the lease ran out in 1967, and was used for performances by the up-andcoming generation of domestic musicians. The club’s founder, tenor saxophonist Ronnie Scott, regularly acted as the club’s genial Master of Ceremonies, and was well known for his repertoire of jokes, asides and one-liners. A typical introduction might go: “Our next guest is one of the finest musicians in the country.

In the city, he’s crap”. On most of the tracks here, Sims plays in a quartet format, backed by Stan Tracey on piano, Kenny Napper on bass, and Jackie Dougan on drums. However, on “Desperation” he is joined by trumpeter Jimmy Deuchar and by Ronnie Scott himself. At the end of October 1961, Sims went to London to fulfil a four-week engagement at that club. It was the first time that the British Musicians’ Union agreed to the appearance of an American musician in England as part of a reciprocal deal.