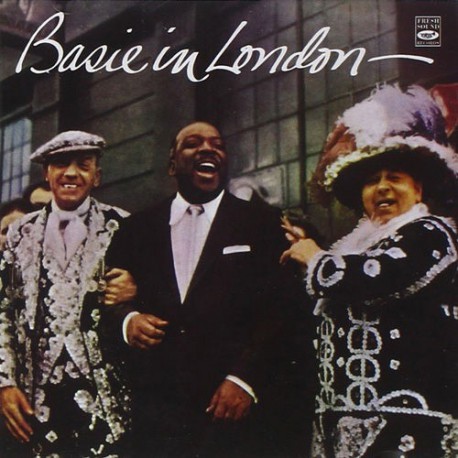 There is an unmatched, limitless vitality to this band led by Count Basie. It has ensemble drive, and its charts are vital jazz statements which demand the best of soloists. Joe Newman, Frank Wess, Frank Foster, and Benny Powell’s playing is inspired and meaningful, while Joe Williams’ singing is vibrantly effective. The rhythm section, with the great Freddie Green, Eddie Jones and Sonny Payne is the ultimate basic of the band, and, of course, the key man here is The Count himself. All musicians at the top of their games, the crowd is fanatically enthusiastic and the band returns their enthusiasm in full. Here is Basie’s band at its best!

"This concert was not recorded in London, England, but in Gothenburg, Sweden. We do not know why Norman Granz opted for the title “Basie in London”—even the original album liner notes make reference to it. And yet, the uniqueness and happy mood that the original cover exudes cannot be denied. For that reason alone we have decided to keep it as it has released for the first time. The music and the repertoire played during that European autumn tour is absolutely marvelous. All charts are of the highest quality, some of them immortal classics of the band, some others were forgotten and never played by the band again.

Track 7 was left as “Untitled” because nobody seems to remember the exact name, arranger, or composer of the tune. I asked both “Franks”, Foster and Wess, but even today this tune eluded them. “It sounds like a Benny Carter arrangement... but it is not,” noticed Foster. When I asked Wess he said he had no idea. “After more than fifty years, it’s very difficult to remember a chart that we played a few times, and on that tour only.” As far as we know, the band never recorded this tune in the studio.