A Symphony of Amaranths (DUSKCD107) 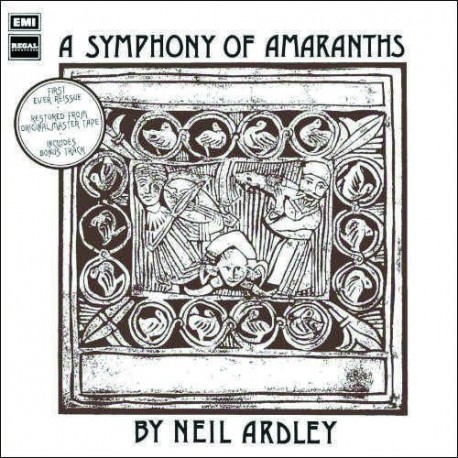 Scored for a large jazz orchestra, this highly-collectable 1971-recorded album also contains two vocal settings by Ardley, being the earliest example of his vocal music. The first is setting of Edwards Lear's famous nonsense poem "The Dong with a Luminous Nose", wonderfully and uniquely told by Ivor Cutler backed by an unusual chamber orchestra containing keyboards, vibraphone, harp, violin and cello that provides an atmospheric setting for the poem. The second setting is of three poems by W.B. Yeats, James Joyce and Lewis Carroll, beautifully sung by Norma Winstone with the large jazz orchestra.

In its first ever CD release, re-mastered from the studio tapes, the album concludes with a bonus track in Ardley's jokey setting of the National Anthem that segues effortlessly into a light tango.

01. A Symphony of Amaranths: Carillon / Nocturne / Entracte / Impromptu
02. The Dong With a Luminous Nose
03. Three Poems: After Long Silence / She Weeps Over Rahoon / Will You Walk a Little Faster?
04. National Anthem & Tango (Bonus Track)