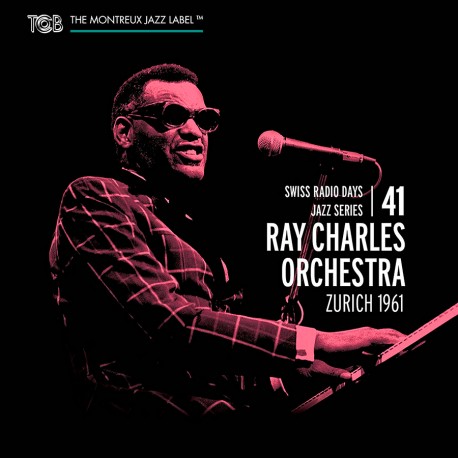 ESSENTIAL RAY CHARLES ON HIS WAY TO CONQUER FRANCE !

In 1961 was a crucial year for Ray Charles. He had been a great success at the Antibes Jazz Festival in July with a ‘small big band’ but in October 1961 he took a chance to hit Europe with a genuine big band, the Rolls Royce of jazz units. It was the ideal platform for what he was developing, and would be, a unique style.

The French recordings have survived, in several forms. Within the live-music part of Ray Charles' total body of work their importance, on the levels of quality, quantity, and uniqueness is only equaled by the Antibes 1961 footage.

However, the first concert of the tour in Zurich, of the same quality and importance, has remained totally unpublished until now, when the great TCB Swiss Radio Days series has recovered it. The sound is magnificent and the band swings from the opener with a remarkably balanced repertoire and brilliantly devised orchestral tuttis. A band at its performing peak from where Ray can deliver his, deliberately, flashy musical credo:  Genius + Soul = Jazz.

Whispering or churchy, tender or punchy, his joy in this first ever concert of a tour that would be crucial for him and his career is audible… almost palpable.

All in all a thoroughly enjoyable concert, musically speaking, and a ‘must’ for collectors and jazz aficionados.