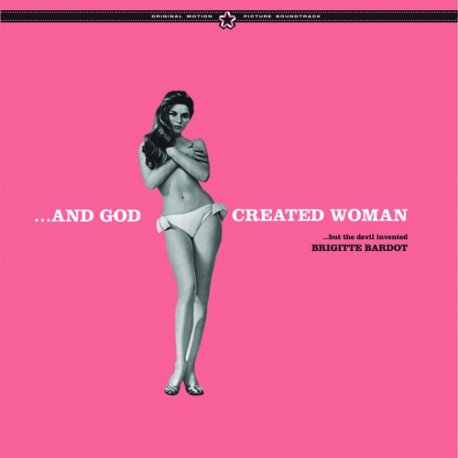 This release presents the original soundtrack to the classic 1956 Roger Vadim film "And God Created Woman" (Et Dieu… créa la femme). Produced in France, this drama wasn’t Brigitte Bardot’s first film, but it catapulted her to fame. It is widely recognized as the vehicle that launched her into the public spotlight and immediately created her “sex kitten” persona, making her an overnight sensation.

The music was written and arranged by French (Turkish born) composer Paul Misraki, and featured the celebrated Sacha Distel’s vocals on the song “Quand j’y pense”, while Brigitte Bardot added her own narration to the two parts of the opening Suite.

The song “Brigitte”, recorded by Sacha Distel in 1958 as a homage to Bardot, and the song “Sidonie” from the soundtrack to her 1962 movie Vie Privée, which marked her first single ever, have been added as a bonus.

Music composed and arranged by PAUL MISRAKI.
Spoken narrations by BRIGITTE BARDOT on A1 & B1.
Vocals by SACHA DISTEL on A2.
Recorded in Paris, France, 1956.