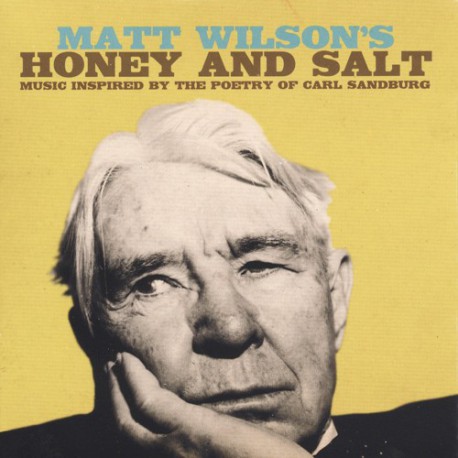 Honey and Salt is loosely divided into three chapters and an epilogue: the first, urban-leaning poems; the second, more rural themes and ideas; the third examining the collision and overlap of the two; and the epilogue serving as a meditative leave-taking. Lee Morgan-esque horn lines over a gut-rumbling blues bassline open "Soup," Sandburg's more-timely-than-ever musing about a celebrity caught in the ordinary act of slurping soup from a spoon. Christian McBride's gregarious baritone intones "Anywhere and Everywhere People," with a series of horn motifs for the poem's key repeated words. Wilson himself recites the contemplative "As Wave Follows Wave," ultimately joined by a host of collaborators, friends and family members. "Night Stuff" unfolds against a slow, twilit landscape, while John Scofield recites "We Must Be Polite" in a hilarious deadpan against Wilson's New Orleans shuffle. Sandburg's own voice can be heard in duet with Wilson's drums on his most revered poem, "Fog." Chapter one closes with the raucous march of "Choose."

Lederer reads "Prairie Barn" (which references a barn owned by a relative by marriage of Wilson's) against Thomson's American-tinged guitar and clattering wind chimes to open chapter two. "Offering and Rebuff" becomes a country love song, while "Stars, Songs, Faces" takes on an Ornette-inspired harmolodic tone. "Bringers" closes the chapter with a taste of down-home gospel. Chapter three opens with Black reading "Snatch of Sliphorn Jazz" in a cantankerous rasp while Lederer and Wilson duet ? a happy accident occasioned by a power outage at the studio. Bill Frisell's soft-spoken voice on "Paper 1" contrasts with Joe Lovano's hep-cat enthusiasm on its companion piece. The two are separated by Rufus Reid's throaty purr on Wilson's Beat-era throwback take on "Trafficker," and the chapter ends with the lyrical "I Sang."

Bley reads "To Know Silence Perfectly," for which Wilson made silence the vehicle for improvisation; in an approach that John Cage would have appreciated, the tune's theme is the same every time, while the length of silences vary based on the performers' whims. Finally, "Daybreak" ends the album on a celebratory note.

As always, Wilson revels in a wide variety of moods and styles throughout Honey and Salt, which takes its name from a 1963 collection of Sandburg's poetry. The title captures the delectable combination of sweetness and spice that characterizes the poet's ? and Wilson's ? work. "That's my favorite volume of his poetry and I love the title," Wilson says. "It has some collision, some rub. Music isn't all flowers and candy; it has to have some edge to it."