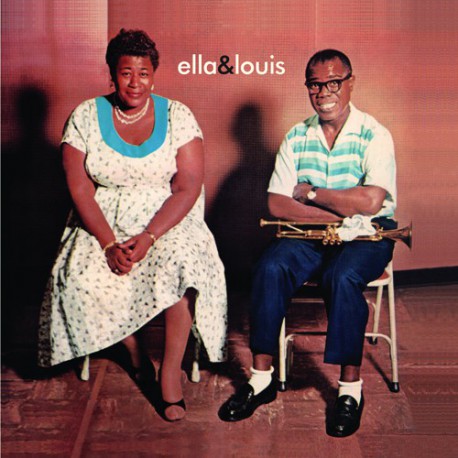 This was the first album pairing Ella Fitzgerald and Louis Armstrong produced by Norman Granz for his Verve label. After recording a series of duets in the late 1940s for the Decca label, they were summoned by Granz in 1956 to make a series of sessions which would result in the present LP and two further double sets: "Ella and Louis Again", and "Porgy and Bess".

"Ella and Louis" received a five-star review in Down Beat, with Nat Hentoff stating that “Ella & Louis" is one of the very, very few albums to have been issued in this era of the LP flood that is sure to endure for decades.” To get such marvellous results, Granz surrounded the stars with an outstanding quartet, consisting of Oscar Peterson on piano, Herb Ellis on guitar, Ray Brown on bass, and Buddy Rich on drums. Armstrong’s career began nearly 15 years before Fitzgerald’s. Louis was actually one of Ella’s first musical idols and even at the early stages of her career she would perform a song in her program (usually “Basin Street Blues”) imitating Louis’ voice. This routine – which can be heard and seen on different live performances by Ella – is done both as a joke and in homage to Satchmo.

By the early forties, Ella was already a well-known star. Although both Ella and Louis had probably met and performed together previously, they wouldn’t be heard on record together until January 18, 1946, when they waxed a single 78 rpm disc coupling “You Won’t Be Satisfied” and “The Frim Fram Sauce”. Their next encounter in the studios took place on August 25, 1950, when they cut two more titles: Charlie Shavers’ “Undecided”, which became a hit, and “Can Anyone Explain”. They were both present on a November 1951 “Bing Crosby Show” radio program, although their collaborations there were not substantial.

Four titles follow from a November 23, 1951 studio session, but the novelty songs selected are largely forgotten now and sound dated when compared to most of the vocal duo’s other recordings. On August 15, 1956, Ella and Louis both performed in a concert at the Hollywood Bowl. Although they mostly sang their own repertoires separately, with their own groups, they got together for a couple of songs (reviving the two biggest hits they had made together up to then) backed by Louis’ All Stars. The following day saw the recording of the celebrated session by Ella and Louis with Oscar Peterson, Herb Ellis, Ray Brown and Buddy Rich that would produce the famous album "Ella & Louis".