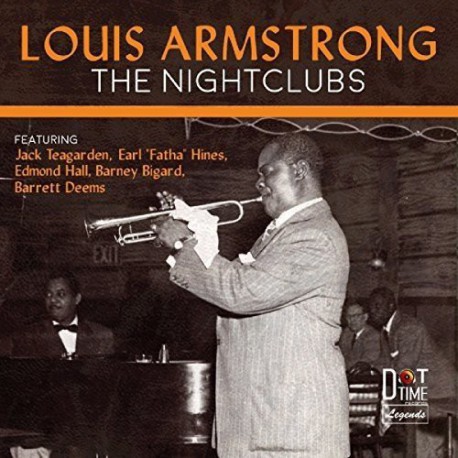 This release contains 16 selections from five different nightclub engagements—Bop City in New York in 1950, Club Hangover in San Francisco in 1952, Storyville in Boston in 1953, Basin Street in New York in 1955 and the Brant Inn in Ontario in 1958–featuring five different iterations of Armstrong’s All Stars, featuring top sidemen such as Jack Teagarden, Barney Bigard, Earl “Fatha” Hines, Arvell Shaw, Cozy Cole, Marty Napoleon, Milt Hinton, Barrett Deems, Edmond Hall and more. No matter the venue or the backing band, Armstrong is peak form throughout, most noticeably showing off at the Hangover with disciple Billie Holiday in the audience, first performing the legendary “West End Blues,” a song that had a formative influence on the young Holiday, then following it with an absolutely on fire version of “A Kiss to Build a Dream On.” Holiday can be heard shouting her approval throughout, just as audiences in 2017 will be cheering on this important new release that once again demonstrates with finality that Pops was always tops.

ON TRACK [7]
Louis Armstrong (tp, voc); Trummy Young (tb, voc); Barney Bigard (cl, voc),
Marty Napoleon (p); Milt Hinton (b); Cozy Cole (d),
Storyville, Boston - Most likely early October 1953.
Louis played there September 29 - October 5 but this broadcast is on the same tape as a concert he did at Boston University on October 1, so that could be the date.