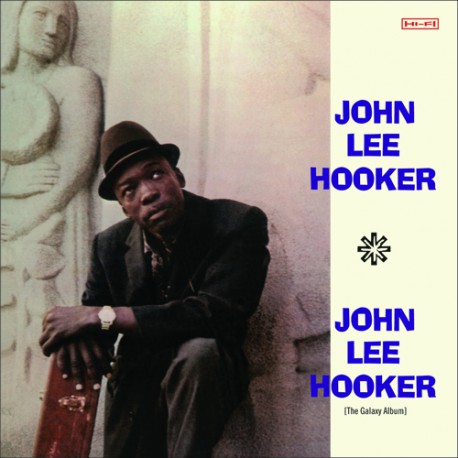 This release presents one of Hooker’s most difficult to find albums, the eponymous "John Lee Hooker", originally released in 1962 by the Fantasy Records subsidiary Galaxy label (it was retitled The King of Folk Blues on a later reissue for the French label America Records). The album includes a selection of hard-to-find recordings Hooker made with his electric guitar during different sessions in the 1950s.

All of the dates were produced by Bernard Besman, the man who helped define Hooker’s recorded sound, which often relied upon heavy walking beats, boogies, and an eerie atmosphere. Mostly, this long-play contains raw solo recordings like the opener “Might As Well Say We’re Through,” “Left My Wife and My Baby,” and “Fire at Natchez,” among others, combined with some full band performances such as “Lost My Job” and the great “Shake It Up and Go.”

In addition to the original LP, this remastered collector’s CD contains 8 bonus tracks, including a number of underrated John Lee Hooker sides taped in Chicago and Detroit between 1949 and 1957. Among the highlights are the fabulous blues “Let’s Talk It Over” (which also features the great Eddie Kirkland on guitar), “Lonely Boy Boogie,” “Baby, You Ain’t No Good,” “Bad Boy,” “Every Night” (here accompanied by a rhythm section), and the closing “Hey Boogie.”
This material constitutes the foundation of Hooker’s incomparable musical legacy.