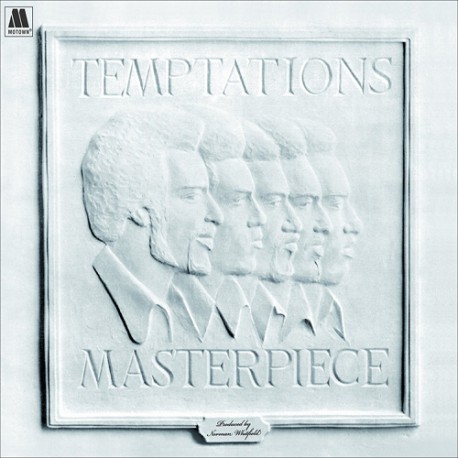 This release presents the acclaimed 1973 album "Masterpiece", by The Temptations, which appears here for the first time on CD format including the full length un-edited studio versions of all of the album cuts (these long versions were previously only available on vinyl).

As all of The Temptations’ “psychedelic soul”-era albums, Masterpiece was produced by Norman Whitfield. Having already produced songs for the Temptations such as “Smiling Faces Sometimes” and “Papa Was a Rollin’ Stone”, which emphasized his instrumental tracks over the group’s vocals, Whitfield went here one step further. The title track, at nearly fourteen minutes long, includes just three minutes of group vocals. Many critics, and The Temptations themselves, remarked that much of Masterpiece, and especially its title track, sounds more like a Norman Whitfield/Funk Brothers solo recording featuring supporting vocals by The Temptations than as a song by the group. Masterpiece reached #1 on the Billboard R&B singles chart, and #7 on the Billboard Hot 100. “Hey Girl (I Like Your Style)” also became a Top 40 hit in the late summer/early fall of 1973, and “Law of the Land” was released as a UK-only single by Tamla Motown, and just missed the UK Top 40, peaking at #41 in late 1973.

Recorded in Hitsville U.S.A. Studio A, Detroit, Michigan,
between September 1972 and January 1973.

01. Hey Girl (I Like Your Style)
Lead singer: Richard Street