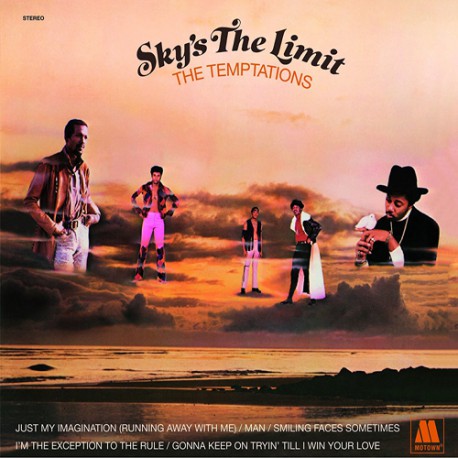 "Sky’s the Limit" is the fourteenth studio album by The Temptations for the Gordy (Motown) label released in 1971. It includes the #1 hit “Just My Imagination (Running Away with Me)”, the Top 40 hit “Ungena Za Ulimwengu (Unite the World)”, and the original version of “Smiling Faces Sometimes”, later a Top 5 hit for The Undisputed Truth. In addition, Sky’s the Limit features the final Temptations’ recordings for founding member Eddie Kendricks, the main lead vocalist on “Just My Imagination”. During the recording of the album, Kendricks departed the group for a solo career. His best friend Paul Williams would soon follow him out of the group due mainly to health issues. The album tracks show Whitfield’s gravitation back towards a ballad format: half of the LP is made up of such tracks. Previous Whitfield co-compositions such as “Gonna bKeep on Tryin’ (Till I Win Your Love)” –originally recorded by Edwin Starr, later The Temptations; from The Tempts’ Cloud Nine album. “I’m the Exception to the Rule” (recorded by The Velvelettes in 1964), and “Throw a Farewell Kiss” (also a Velvelettes original) were revived and recorded for this album. Sky’s the Limit took the group into expansive territory that was barely hinted at in their early work. The album’s got some incredible tracks in the Whitfield mode – long numbers that build and build, opening up into long righteous soul grooves with more than a bit of funk – a hard-rolling style that the harmonies really work wonderfully bto match – giving Motown some of its most powerful sounds of the time.

01. Gonna Keep on Tryin’ Till I Win Your Love
Lead singer: Eddie Kendricks

02. Just My Imagination (Running Away with Me)
Lead singers: Eddie Kendricks & Paul Williams

08. Love Can Be Anything (Can’t Nothing Be Love but Love)
Lead singers: Eddie Kendricks, Dennis Edwards & Melvin Franklin