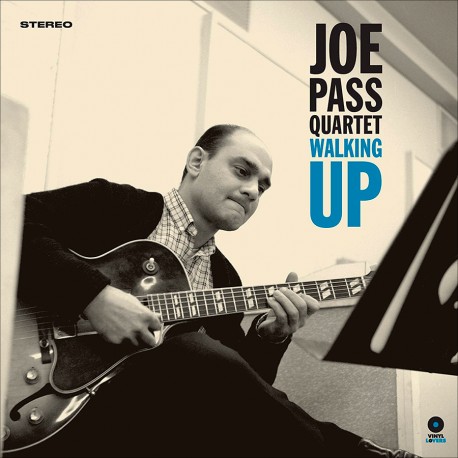 JOE PASS, guitar
On all tracks, plus:

This edition contains some of Joe Pass’ earliest quartet dates under his own name. Pass was born Joseph Anthony Jacobi Passalacqua, on January 13, 1929, in New Brunswick, New Jersey (hedied from liver cancer on May 23, 1994 at the age of 65). Pass was celebrated for his extensive use of walking bass lines, melodic counterpoint during improvisation, use of a chord-melody style of playing, and outstanding knowledge of chord inversions and progressions, which opened up new possibilities for the jazz guitar. As early as 14 years old, Pass started getting gigs and was playing with bands fronted by Tony Pastor and Charlie Barnet, honing his guitar skills and learning the music business. He began traveling with small jazz groups and eventually moved from Pennsylvania to New York City. He soon developed personal problems and spent much of the 1950s in relative obscurity. Pass managed to emerge from it through atwo-and-a-half-year stay in a drug treatment center called Synanon. During that time he played guitar nonstop and further honed his skills. In 1962 he recorded Sounds of Synanon. It was about this time that Pass received his trademark Gibson ES-175 guitar as a gift, which he subsequently used for touring and recording for many years. Passwould later record a series of albums for the Pacific Jazz label which became classics, including 12-String Guitar, For Django, and Simplicity. In 1963 he received the Down Beat magazine “New Star” award.