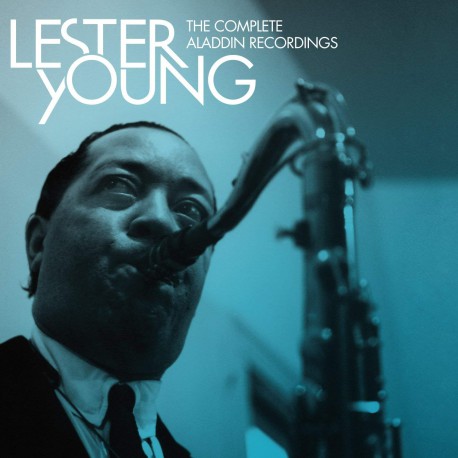 Notify me when available
This release presents the great Lester Young’s complete sessions for the small Aladdin label, which were made right after the saxophonist’s release from prison and dishonourable discharge from the U.S. Army. Althoughlegend has it he was never the same after his experiences in the military, Young’s playing throughout these recordings
exceeds even his own high standards.

While Lester’s Army experiences undoubtedly left their mark on the saxophonist, it would be incorrect to state that all of his troubles began at that time. Being subjected to strict treatment (in which racism played an important role) was certainly hard on Lester. However, it is also true that he was a complex person with strong self-destructive impulses. However, his playing here is superb in most cases, and his interaction with other great musicians like Nat King Cole, Dodo Marmarosa, Joe Albany, Argonne Thornton (who later changed his name to Sadik Hakim), Willie Smith, Howard McGhee and his Basie companion Vic Dickenson proves to be very effective. As a bonus to the Aladdin sessions, we have included the other studio session by Lester with Nat King Cole, recorded for Norman Granz for his label Norgran in 1946.