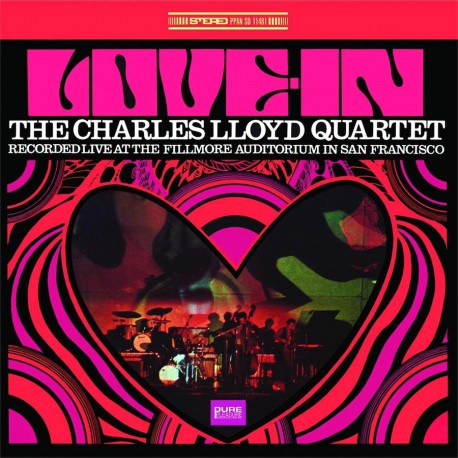 Five decades after the event, Charles Lloyd's Love-In, recorded live at San Francisco's Fillmore Auditorium in 1967, endures as much as an archaeological artefact as a musical document. From sleeve designer Stanislaw Zagorski's treatment of Rolling Stone photographer Jim Marshall's cover shot, through the album title and some of the track titles ("Tribal Dance," "Temple Bells"), and the inclusion of Lennon & McCartney's "Here There and Everywhere," Love-In's semiology is a powerful reminder of the acid-drenched zeitgeist of the mid 1960s. It was a time when large numbers of rock fans were prepared to embrace jazz, provided the musicians did not come on dressed in suits and ties, exuding cynicism and alcohol fumes./p>

It is possible that more joints were rolled on Love-In's cover than on that of any other jazz LP of the era, with the exception of John Coltrane's A Love Supreme (Impulse!, 1965) and Pharoah Sanders' Tauhid (Impulse!, 1967). Chet Helms, a key mover and shaker in the West Coast counterculture, spoke for many when he hailed the Lloyd quartet as "the first psychedelic jazz group."

The counterculture's embrace was triggered by Lloyd's media savvy, sartorial style and sheer nerve in playing jazz in the temples of rock culture as it was by his music. He took the quartet into the Fillmore West three years before Miles Davis played the Fillmore East—as documented on Live at the Fillmore East, March 6 1970: It's About That Time (Columbia, 2001)—by which time Lloyd's pianist, Keith Jarrett, and drummer, Jack DeJohnette were members of Davis' band.

In purely musical terms, Love-In is not Lloyd's strongest Atlantic-era album, and even with Wally Heider at the board it shows up some of the limitations of contemporary live recording. But it still has legs. Lloyd's vocalized tenor (and flute on two tracks) has muscle; Jarrett's solos, particularly on his 07:55 showcase, the gospel-ish "Sunday Morning," his two featured originals ("Sunday Morning" and the soul jazz-ish "Is It Really the Same?"), and his playing the strings of the piano directly with his hands, all remain compelling; DeJohnette and bassist Ron McClure are solid and inventive.

Originally released on Atlantic in 1967, Love-In has been reissued by vinyl-only label Pure Pleasure. It is good to have it back. - Chris May/All About Jazz

Recorded live at The Fillmore Auditorium in San Francisco 1967.