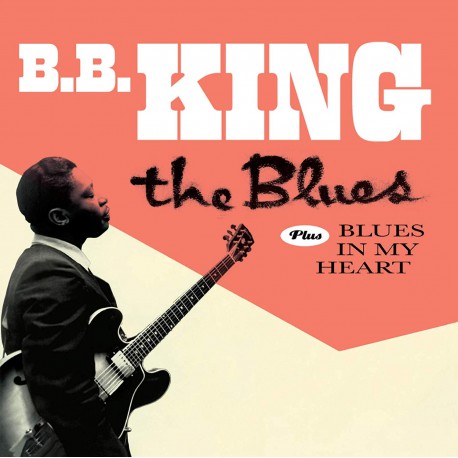 This release includes two of B. B. King’s finest albums: The Blues (1958) and Blues in My Heart (1962), which were both originally released at the onset of King’s career. The Blues marked his second budget priced LP on the Bihari brothers’ Crown label, and collects a dozen sides King cut for RPM and Kent between 1951 and 1958. This album is distinguished by a raw, ragged feel, which proves refreshing in light of the artist’s subsequent slicker recordings. It has a loose, roadhouse vibe and features King backed by a full band, including horns, piano, harmonica, and a thumping rhythm section. At the heart of the set are King’s stinging, soulful leads and his passionate vocals, serving up instant classics like “Why Does Everything Happen to Me” and “When My Heart Beats Like a Hammer”. As was often the case with Crown’s product, The Blues used a single hit tune (in this case the aforementioned “When My Heart Beats Like a Hammer”, a Top Ten R&B chart entry in 1954) to help sell a package of lesser-known material, but thankfully the label also picked some great tunes that hardly sound like filler, even if they didn’t make the charts. The album is dominated by muscular, horn-driven performances with B. B. King’s interjections of single-note riffs and powerful string bends punctuating the arrangements. His songwriting was already stellar, with “I Want to Get Married”, “Don’t You Want a Man Like Me”, and “Ruby Lee” demonstrating his way with a melody and lyrics. This edition also includes 4 bonus tracks from the same period. An entertaining mix of booting R&B and blues ballads, this material draws primarily from the Kent singles of that era, including exciting versions of “Hold That Train”, “My Sometime Baby”, and “Treat Me Right”, and from the RPM label with the gorgeous “I’m in Love” and its big-band sound.

B. B. KING, vocals and guitar, plus:
1-12: THE BLUES
The Maxwell Davis Orchestra.