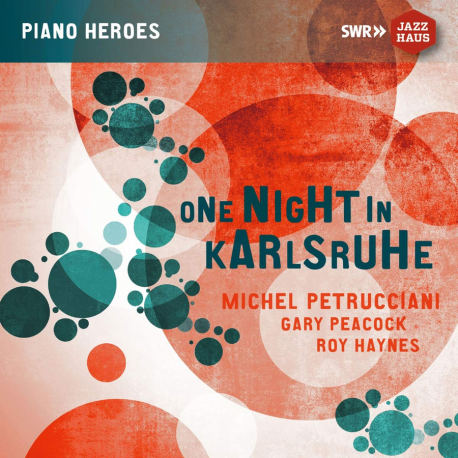 One Night in Karlsruhe

Recorded in Germany on July 7, 1988, One Night in Karlsruhe presents an amazing never before heard concert by a unique trio. French pianist Michel Petrucciani (1962-1999) became one of the most accomplished jazz pianists of his generation despite having arms that caused him pain (from birth he had osteogenesis imperfecta, a genetic disease that causes brittle bones and, in his case, short stature). Bassist Gary Peacock needs no introduction, the peaks of his extended career probably being his stays with the Bill Evans Trio and his collaborations with Keith Jarrett's "Standards Trio". Roy Haynes, 93 years-old at this writing, was among the bebop pioneers working with Charlie Parker in the late 1940s. Among the most recorded drummers in jazz, his career spans over 70 years.

Petrucciani, Peacock and Haynes only recorded together as trio on one more occasion, the September 24, 1987 studio date included on Petrucciani's Blue Note album Michel Plays Petrucciani. On that album, as explained in the title, all of the compositions were by the pianist (four of them, "13th", "One for Us", "She Did It Again", and Mr. K.J." are rendered live on the Karlsruhe concert, which also includes a version of Petrucciani's "La Champagne", not included on the studio album). However, this live set is the only chance to hear the trio playing standards, and they offer virtuous and poignant readings of such classic numbers as "My Funny Valentine", "There Will Never Be Another You", Ellington's "In a Sentimental Mood", Gershwin's "Embraceable You", and Coltrane's "Giant Steps". Sound quality is crystal clear on this spirited concert, which along with the aforementioned studio date is the only existing collaboration between Petrucciani and Peacock. The pianist and Roy Haynes would reunite in the studio again in 1995 to record Flamingo, along with Stèphane Grappelli and George Mraz.