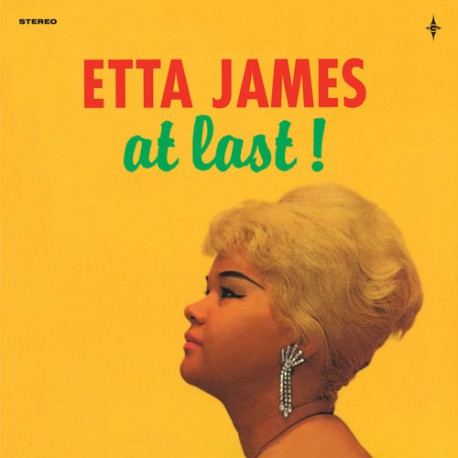 “After spending a few years in limbo after scoring her first R&B hits ‘Dance With Me, Henry’ and ‘Good Rocking Daddy,’ Etta James returned to the spotlight in 1961 with her first Chess release, At Last! James made both the R&B and pop charts with the album’s title cut, ‘All I Could Do Was Cry,’ and ‘Trust in Me.’ What makes At Last! a great album is not only the solid hits it contains, but also the strong variety of material throughout. On this album one hears the singer at her peak in a swinging and varied program of blues, R&B, and jazz standards.” (Stephen Cook)

ETTA JAMES, lead vocals
The Riley Hampton Orchestra.
Arranged and conducted by Riley Hampton.
Recorded in Chicago, Illinois, between 1960 and 1961.


An exclusive 7" colored single containing the rare mono versions of "At Last"
and "I Just Want to Make Love to You", two of Etta's greatest hits

ETTA JAMES, lead vocals
The Riley Hampton Orchestra.
Arranged and conducted by Riley Hampton.
Recorded in Chicago, Illinois, between 1960 and 1961.