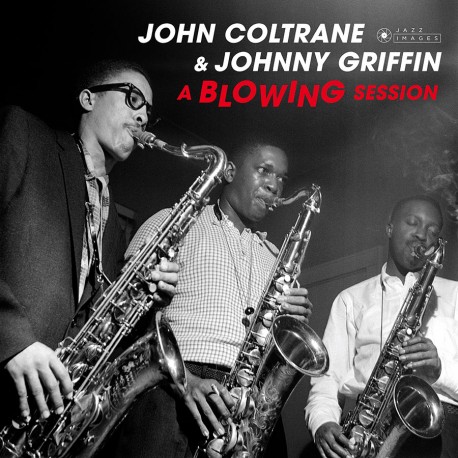 This album, which ended up being the only recorded collaboration between John Coltrane and Johnny Griffin, wasn’t planned that way. Initially Coltrane wasn’t scheduled to be on this date, but Griffin saw him on his way to Rudy Van Gelder’s studio and asked him to join the remaining musicians, third tenor Hank Mobley, trumpeter Lee Morgan, pianist Wynton Kelly, bassist Paul Chambers, and drummer Art Blakey. These musicians were all associates within the same East Coast hard bop scene of the time; they came from the Jazz Messengers and Miles Davis’ quintet, and many had played with Dizzy Gillespie’s big band. The date produced versions of two standards, “The Way You Look Tonight” and “All the Things You Are,” along with two original Griffin compositions, “Ball Bearing” and “Smoke Stack.” The opening track features the three tenors trading off with complexity and speed that is still astonishing. The only other existing version of “The Way You Look Tonight” featuring Coltrane, recorded the following month for the Mal Waldron LP Mal/2, has been added as a bonus.

1 ALL THE THINGS YOU ARE 2 SMOKE STACK

One of the most renowned jazz photographers of all time, Francis Wolff (1907-1971) was also a record company executive and producer, whose skills were essential to the success of the Blue Note record label. Born Jakob Franz Wolff in Berlin, Germany, he soon became a jazz enthusiast, despite the government ban placed on this type of music after 1933. A Jew, in 1939 he left Berlin, where hehad worked as a commercial photographer, and established himself in New York. He began working there with his childhood friend Alfred Lion, who had co-founded Blue Note Records with Max Margulis. The latter soon dropped out of any involvement in the company, and Wolff joined Lion in running it. Wolff took thousands of photographs during the label’s recording sessions and rehearsals. His highly personal visual concept would be forever associated with both Blue Note and jazz as a whole.