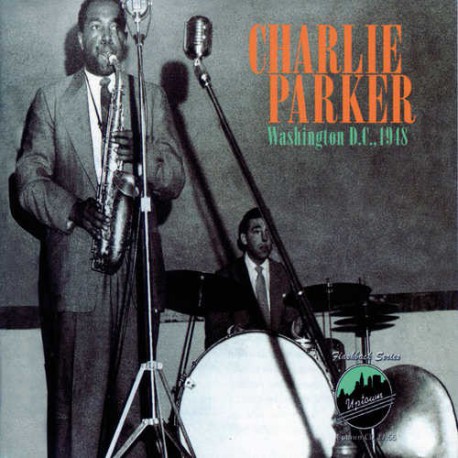 
Just when it seemed like every last Charlie Parker live recording had been uncovered and issued, Uptown managed to find another.
This is a portion of a 1948 concert produced by MC Willis Connover (who gained fame as the jazz producer of Voice of America and the founding producer of the New Orleans Jazz Festival) that featured separate sets by Dixieland jazz musicians and boppers, with the intention of mixing both in a jam session to wrap the performance.

Recorded onto 16-inch transcription discs, after an opening septet by local Washington, D.C., musicians, Parker is added and Buddy Rich takes over on drums (though not using his own set), starting with one of the earliest known versions of "Bernie's Tune," followed by "These Foolish Things," both showcasing Parker in top form.
Trumpeter Charlie Walp and tenor saxophonist Ben Lary shine in the extended workout of "Scrapple from the Apple" following the composer's inventive solo.
Pianist Sam Krupit shares the solo spotlight with the alto saxophonist in a breezy take of "Ornithology," while Parker and Rich deliver a furious rendition of "Koko." Unfortunately, the planned meeting between the Dixielanders and the boppers in "C Jam Blues" comes to a crashing halt after Wild Bill Davison evidently took offense to Parker's laughter at the end of Tony Parenti's clarinet solo, when he abruptly ended the performance, though the sound is faded as Parenti is still playing and may not have been documented on the source material.
The historic nature of this concert and the detailed liner notes by Ira Gitler, Ross Firestone, and Ron Fritts make this an essential CD for serious bop fans.