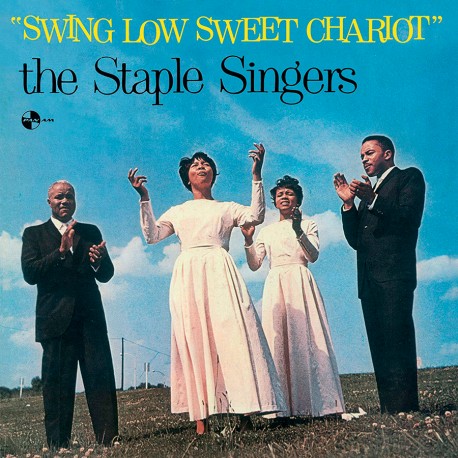 This special LP edition includes The Staple Singers’ magnificent debut album, Swing Low Sweet Chariot, which is widely regarded as one of their finest. It was recorded in Chicago, between the late Fifties and early Sixties. The long play was originally released by Vee Jay Records in 1961 and has been long unavailable on vinyl.

Swing Low Sweet Chariot presents The Staple Singers at their sanctified best. Venture into any African American church where the traditional gospel sound still dominates and you’re bound to hear many of the songs on this 1961 recording. But it’s highly unlikely that you’ll find anyone performing with the soul and dexterity of Pops Staples. The level of musicianship on these songs is first rate, and much of this can be attributed to him. Undoubtedly the skilled guitarist loved the Lord, but the Mississippi-born musician who had worked on the famed Dockery plantation adored the blues as well. The influence of Charlie Patton, Blind Lemon Jefferson and other great bluesmen from the Mississippi Delta can be heard throughout the album, from the opener “I’m So Glad,” passing through the gospel- R&B of “Good News,” to the stunning title track.