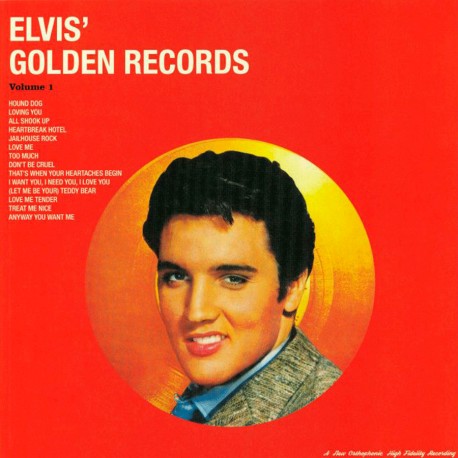 This quintessential collector’s edition includes the sensational album Elvis’ Golden Records. The fifth album by Elvis Presley, it was issued by RCA Victor (LPM 1707) in March 1958. This masterpiece is a compilation of hit singles released in 1956 and 1957,and is widely believed to be the first greatest hits album in rock and roll history. It is the first of five Elvis Golden/Gold Records compilations, four of which would be released during Presley’s lifetime. Golden Records contains eight number one A-sides along with five B-sides, “Hound Dog”, “Loving You”, “That’s When Your Heartaches Begin”, “Treat Me Nice”, “Anyway You Want Me”, and one album track, “Love Me”, originally issued on the 1956 LP Elvis. Every flipside also hit the chart separately from its parent hit side, with four making the Top 40, and “Hound Dog” also topping the chart; chart positions noted for those tracks individually. “Love Me” was also included on the Elvis Vol. 1 EP single which made the top ten on the singles chart. Without a doubt, this masterpiece helped define the exact nature of early rock & roll and contains several commercial hits with which the King of Rock made his name.