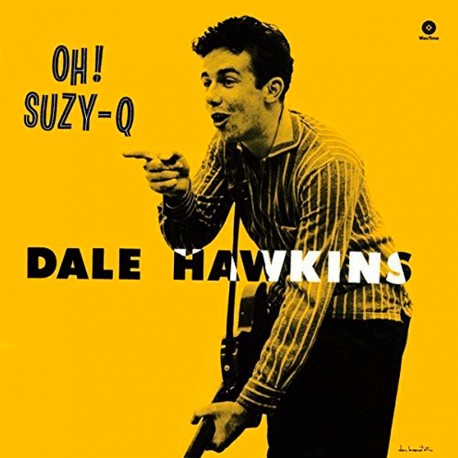 This quintessential collector’s edition includes Dale Hawkins’ most famous and essential album, Oh! Suzy-Q. Originally issued by the Chess label in 1958, it helped define exactly what was rock & roll. Countless artists spend their lives pursuing one great hit. Hawkins would have done just fine if his only contribution to music were “Susie-Q” (the song by which he is best remembered). However, he would also record such hits as “Tornado,” “See You Soon Baboon,” “Take My Heart,” “Don’t Treat Me This Way” and “Four Letter Word (Rock),” among other jewels included in this LP.The album didn’t sell very well during that era, but it became a favorite of later generations of musicians. In a time when exposure to many kinds of music was the norm, Hawkins absorbed them all like a sponge. But his distinct preference for black music would always exert the greatest influence, giving his work a harder edge than that of most of his contemporaries. In fact, he was the first white rock & roll/rockabilly singer to perform at the famed Apollo Theater in New York City’s Harlem district.In addition to the original masterpiece, this WaxTime release includes 4 bonus tracks, consisting of hard-to-find sides from Hawkins’ earliest stay on Chess Records (and their subsidiary the Checker label). These splendid recordings feature a virtual who’s who of great sidemen including Willie Dixon on bass, a 15-year-old James Burton on guitar (who went on to work with Ricky Nelson and Elvis Presley), Roy Buchanan (who taught Robbie Robertson of The Band), and Elvis’ original drummer D.J. Fontana, among others.

DALE HAWKINS, vocals and guitar on all tracks, plus: