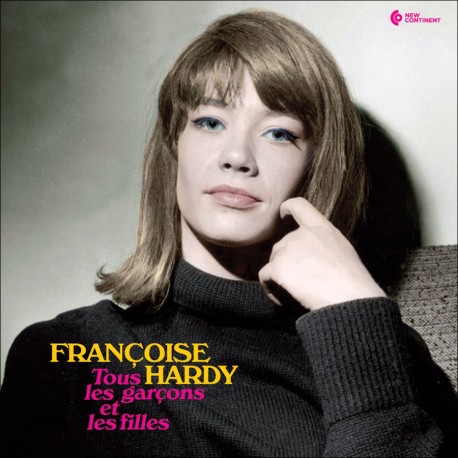 One of the most popular French TV extracts of all time is the black and white image of a young and extremely nervous-looking Françoise Hardy being given a firm dressing-down by Mireille Hartush (the famous music teacher who ran La Petite Conservatoire de la Chanson in the 1960s). Presented here is her debut studio album Françoise Hardy (issued as The “Yeh-Yeh” Girl from Paris! in the USA). It was released in France in December 1962 by Disques Vogue with the catalogue number LD 600-30. Originally issued with no title, except for her name on the cover, the album has therefore colloquially become known by the title of its most successful song, “Tous les garçons et les filles,” and later reissues added this title. This sensational album compiles the twelve original French versions from her first three EPs released by Vogue during 1962. Hardy would also record versions of songs from the album in Italian (1962, four tracks released on singles have been added here as a bonus), English (1964) and German (1965). The iconic LP combines rockabilly, folk, jazz and blues, and has been noted for its simplicity, featuring a minimalist jazz percussion, bass, and both acoustic and electric guitar"

Recorded at Studio Vogue, Villetaneuse, France, between April and November 1962.