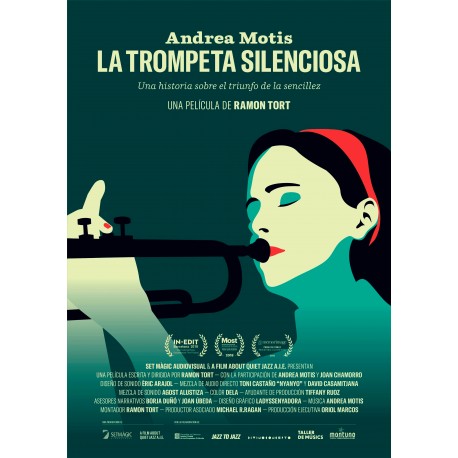 Andrea Motis excelled already at an early age. From the age of seven, Motis developed musically at the Municipal School of Music of Sant Andreu, a neighborhood of Barcelona, becoming the school's lead trumpeter and later saxophonist for the Sant Andreu Jazz Band - a youth jazz band from Barcelona, featuring 7- to 20-year-old children and teenagers lead by bass player Joan Chamorro. When she was 14, she turned down a juicy offer from Blue Note. At 16 turned down another offer from Universal. Finally, her moment came at 21 when she released her album ‘Emotional Dance’ with Impulse!– the label of John Coltrane.

Andrea Motis, The Silent Trumpet, follows very closely Andrea Motis’ process to finally become an international music figure. Here, Ramon Tort’s camera follows her around the year prior to recording her album for Impulse! in New York. Months filled with great changes and emotions: Embarking on a world tour that takes her to perform to Japan, Europe and the United States and leaving her parent’s house to live with her boyfriend. It documents a crucial moment in the life of a young talented woman who one day is singing with Omara Portuondo at the Beacon Theatre in New York City, and the next she’s eating a quick bite between her classes while practicing non-stop.

This is an intimate story, charged with emotions chronicling a moment that’s unique and irreplaceable, the fears and ambitions just before we jump in into the unknown. A movie about vital changes and jazz, a lot of jazz.