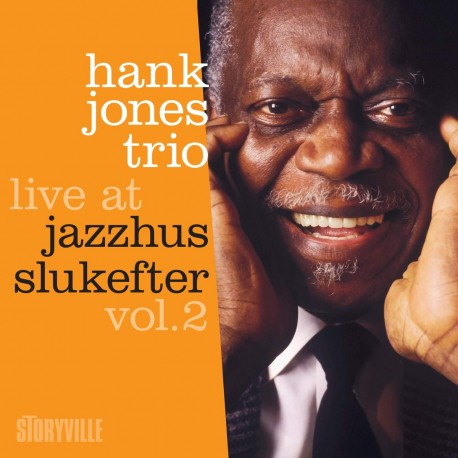 Storyville Records presents the magnificent second half of jazz pianist Hank Jones' concert at the Jazz Club Slukefter, in Copenhaguen, Denmark, recorded on June 7, 1983. The first half was released two years ago, and now it's time for the concluding set. The concert's first half was a mixture of well-known jazz standards with a few jazz originals by Charlie Parker and Bud Powell.

The second one, on the other hand, with the sole exception of Rodgers & Hart's "All the Things You Are" and Franz Lehar's "Yours Is My Heart Alone" (the latter a song from the 1929 operetta The Land of Smiles [Das Land des Lächelns], first adapted to jazz by Oscar Peterson), consists of tunes written by jazz musicians.

The CD includes splendid versions of Joe Henderson's immortal "Recorda Me", Horace Parlan's "Arrival", Johnny Mandel's "Emily" (frequently performed by Bill Evans), Thelonious Monk's "Ruby My Dear", Eddie Gomez's "The Bruise", J. J. Johnson's "Interlude", and Charlie Parker's "Moose the Mooche".  From these songs, "Interlude, "The Bruise" and "Arrival" were very infrequently recorded by Jones, and just one other version of each is listed on his discography.

As on the previous CD, Jones is here in a trio format, backed by Danish bassist Mads Vinding, with whom he would continue working up to 1992, and star drummer Shelly Manne, with whom Hank Jones had first recorded during a Charlie Parker date in 1947. This concert marks the last recording ever of Jones and Manne together after many years of collaborating in several different settings. Manne would die of a sudden heart attack the following year at the age of 62 (Jones would live up to the age of 91, dying in 2010).

All in all, this is a marvelous complement to the first volume, finding Hank Jones at the top of his game in a performance that puts in evidence his bebop roots, but also all the musical knowledge and wisdom achieved after a successful 40-year career.