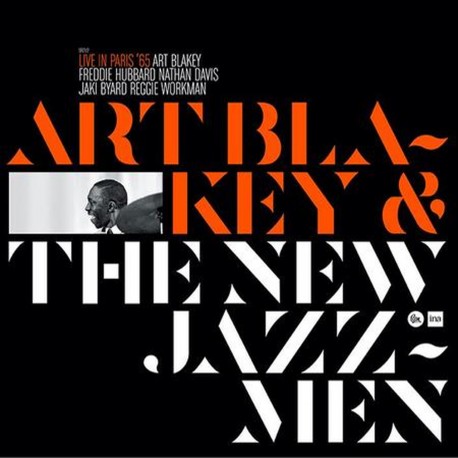 Available on vinyl only. No CD, No Digital is scheduled.

Art Blakey, Live in ’65 boasts an exceptional one-hour concert from Paris in 1965. This performance showcases one of the few undocumented Blakey bands, the New Jazzmen, featuring Freddie Hubbard on trumpet, Jaki Byard on piano, Reggie Workman on bass, Nathan Davis on sax, and, of course, Blakey on drums.
Freddie Hubbard’s incendiary playing on “Blue Moon” and the blistering 24-minute version of his own “Crisis” shows that he was one of the most innovative trumpeters in jazz history.

On this live session, the audiences seem to have been enthusiastic and appreciative. “Everywhere we’d go people would say, This is the best Jazz Messengers we’ve heard!”, according to Davis. “And because of the way Jaki would play and Reggie would go, it was like a semi-freedom thing – with Messengers heads, you know, but when we got to soloing…! And Blakey was ridin’ and floatin’ the time…but he would always be loose enough to follow, to keep it going. He’s one helluva musician.”