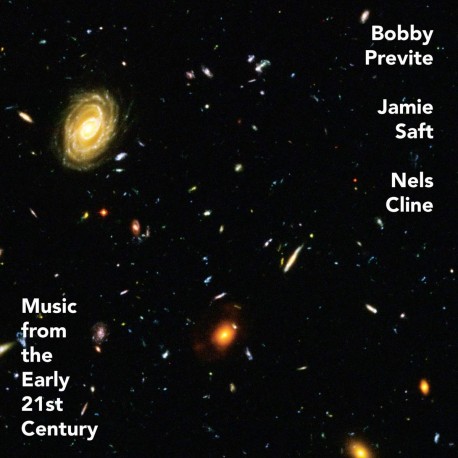 Music From The Early 21st Century

When future generations listen back to the sounds of this still young millennium, what music will remain to define the era? Master improvisers Bobby Previte, Jamie Saft and Nels Cline make their bid for immortality with Music From the Early 21st Century, their venturesome collaborative album.

While hardly representative of the hits streaming through the Bluetooth ether these days, Music From the Early 21st Century is nonetheless aptly titled, colliding as its does entire threads of musical history leading up to the very moment of its explosive creation. The album, captured live during a brief tour of the Northeastern U.S. in early 2019, is essentially a freely improvised organ trio set. But filtered through the lens of these three encyclopaedically eclectic masters, it morphs continually from one prismatic hybrid of styles to another throughout its ten carefully curated pieces.

From the monolithic howl of Photobomb, opening the album by diving directly into the deep end, to the closing Krautrock pulse of Flash Mob, the improvisations conjured by the trio never for a moment lose focus, vitality or urgency. In part that’s due to the expert curation of Previte, who unearthed the standout moments from hours of recordings, and to the brilliant live recording and mastering of Saft and longtime collaborator Vin Cin of New York’s Electric Plant studio; but at its core, it’s due to the inventive spirit of these three uncanny virtuosos.

Track to track, it soon becomes clear that there’s no limit to the terrain that this band can explore. Paywall bridges hard rock and dub, while Saft’s brisk walking bassline on Parkour spurs Cline to channel his best Sonny Sharrock skronk. The Extreme Present offers a mutant take on 60s soul, while Totes immerses the listener in a psychedelic haze. Occession is 14 minutes of grinding, spiraling noise abstraction, The New Weird ten minutes of hypnotic spiritual jazz. The cyborg churn of Machine Learning is followed by the transcendent ecstasy of Woke.