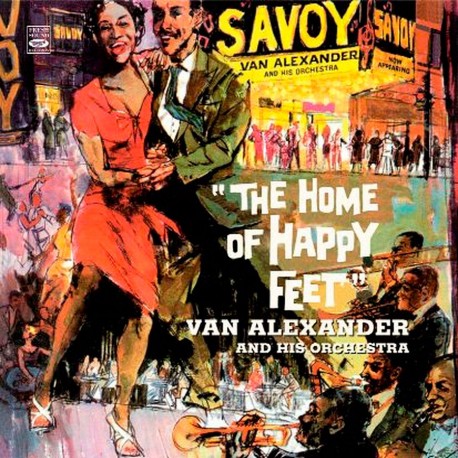 The Home of Happy Feet

The Home of Happy Feet

Notify me when available
A swinging salute to the great bands and tunes featured at New York's legendary Savoy Ballroom.


In 1959, when “Savoy Stomp” was recorded, bandleader Van Alexander was a top TV and recording studio arranger in Hollywood. Despite that professional recognition at the top of the West Coast music business, some of his warmest recollections went back to his early days at the Savoy Ballroom in New York’s Harlem where, barely out of his teens, he got his start as an arranger for the great Chick Webb and his band.  Recalling those days, Alexander assembled a band of some of the finest Hollywood musicians to record a collection of driving arrangements which really capture the flavor of the swinging “Savoy years.” Nat King Cole was in no doubt about the quality of the results. “It’s one of the finest albums of big-band swing ever recorded!”

The last eight tracks of this set are also closely related to the Swing Era, but were recorded in 1947 under the guidance of Van Alexander, who put together two Hollywood all-star bands to revive the famous Mills Blue Rhythm Band of the 30s.
PERSONNEL: