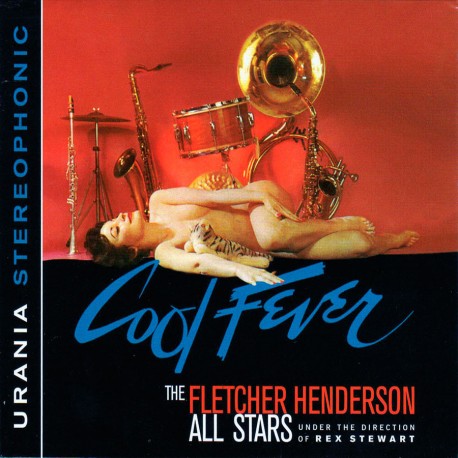 
This album reunited many members of the legendary Fletcher Henderson band in a set that recalled the tradition of big-band swing and stellar soloists. It is not only a reunion, but also a recreation of the sound and style that foreshadowed the heyday of the big white bands that borrowed so much from outfits such as Henderson’s.

The storming drive and roaring spirit is clearly evident in the section work and in the wild succession of solos. Rex Stewart’s cornet and the three trumpets lend constant solo quality to the set, and Hawkins and Webster, seminal figures on the tenor saxophone, both play magnificently, while Buster Bailey’s fluid clarinet and Jefferson’s alto are heard in several swinging, warm, and expertly controlled solos.

Tracks #1-8 were originally issued
on Jazztone as "The Big Reunion"
Fletcher Henderson All Stars in Hi Fi,
Under the direction of Rex Stewart" (J 1285).

"The Big Reunion" was produced especially
for Jazztone Society by George T. Simon.

As George T. Simon reports in his excellent liner notes, all the soloists except Jordan, Casey and Richards, at one time or another, worked with Henderson.

Not all the tracks are big-band chargers. Jim Timmens wrote four arrangements for a smaller group, giving Hawkins and Jefferson opportunity to play ballads.

Under the supervision of jazz writer and producer George T. Simon, this album was recorded and originally issued on LP in highfidelity mono on the Jazztone label as The Big Reunion, and later in stereo on Urania Records, under the title Cool Fever.