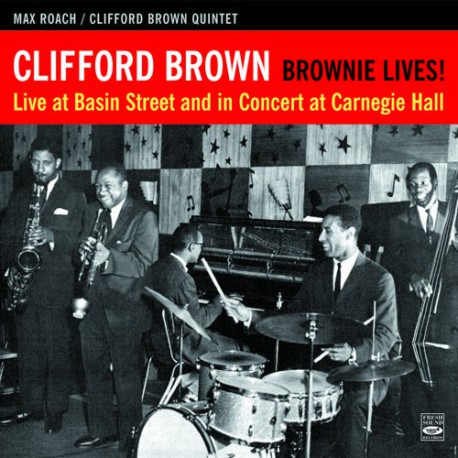 Although Clifford Brown did a phenomenal amount of commercial recordings during his all too brief lifetime (he died prior to his 26th birthday in a car crash that also took the life of his quintet's pianist Richie Powell, Bud's younger brother), relatively few of the recordings he made were on stage. Fortunately, this CD includes performances from two 1956 broadcasts from the old Basin Street club in New York City, and two tracks from a Carnegie Hall concert the previous year.

Rollins' "Valse Hot" is a loping but swinging waltz, while the wild ride through the oldie "I Feel a Song Comin' On" is rekindled as a prime bop vehicle. Willy Jones replaces an ailing Max Roach on the next three tracks: a gorgeous rendition of Bob Haggart's timeless ballad "What's New" (a feature for Brown with some lush accompaniment by Powell); a sparkling version of one of Brown's best-known compositions, "Daahoud"; and another work by Brown, "Sweet Clifford," which is introduced by the MC as "Sweet Georgia Brown" (the piece it was based upon). Harold Land preceded Rollins in the tenor sax chair and is present on the Carnegie Hall material, including a version of "I Get a Kick Out of You" that starts out as a waltz before cutting loose into a bop firestorm. The trumpeter's "Blues Walk" is stretched out to give the soloists a little extra space to work their magic.