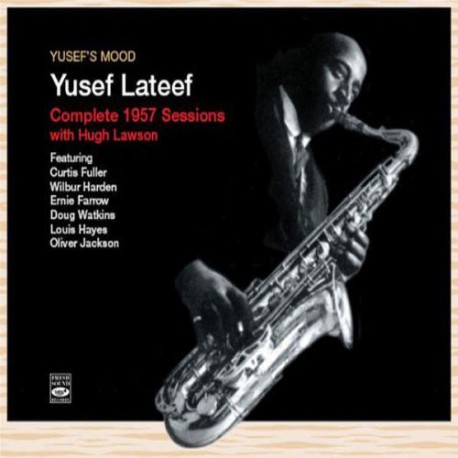 In 1950, after a year on tour with Dizzy Gillespie’s band, Yusef Lateef returned to Detroit, the city where he had grown up as a jazz musician. With his powerfully preaching tenor sax tone and fluent, driving style he established himself as an influential presence in the Motor City scene, forming his own quintet in 1955. He made his first recordings as a leader in 1957, a productive year for him, as this gripping 4-CD set reveals. On it he plays tenor and flute with a compelling directness and overpowering honesty, surrounded by a nucleus of Detroiters like Curtis Fuller, Ernie Farrow, Louis Hayes, Oliver Jackson, Wilbur Harden and, especially, Hugh Lawson, whose rolling, two-handed piano is as exciting in solo as it is in his intelligent comping. The entire group plays in inspired fashion, speaking authoritatively for the Detroit jazz scene.

The hardcore of these sessions were recorded by Rudy Van Gelder in Hackensack, New Jersey
Note: In addition to the standard jazz instrumentation, some compositions, notably for the time, included several near-Eastern ethnic instruments to produce a remarkable blend of oriental harmonies, sounds and effects, superimposed on wailing jazz without compromising its unity or quality. These include the rebob, earth board, argol, tambourine, Chinese gong, finger cymbals, scraped gourd, bells, and other devices, among them a balloon and a 7-up bottle to achieve some uniquely arresting effects.
More details and information in the booklet !!