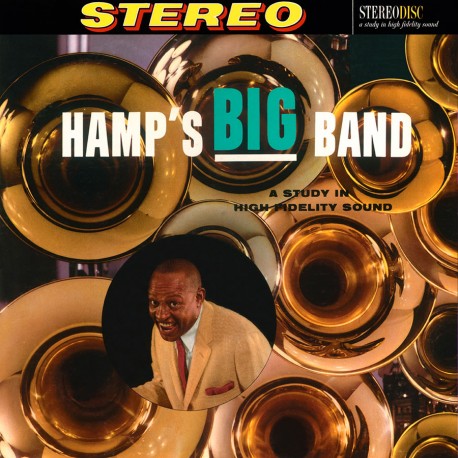 Hampton’s talent didn’t diminish with the passing of the years. The outstanding album presented here showcases his breathtaking skills during the early days of Stereophonic recordings. Titled Hamp’s Big Band, the LP contains a big band session in which the master can be heard alternating between vibes, piano and drums.

He even sings on some tracks! Although the track Blue Lou (listed incorrectly on the original back cover as Blue You) was recorded during the Hamp’s Big Band sessions, it didn’t appear on the original LP confi guration despite being mentioned in the album’s original liner notes.
Instead, the song was only originally issued on a Playboy magazine compilation album. It is included on this edition with the rest of the music produced that day, all of which is issued here on CD for the fi rst time ever.
As a bonus, this release contains a complete session from the Silver Vibes album, which features such important modern jazz musicians as pianist Tommy Flanagan, trombonist Eddie Bert, and drummer Osie Johnson.