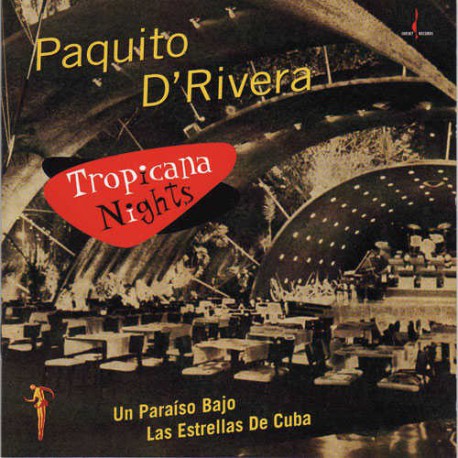 Awarded "Best Latin Jazz Album" Grammy at 1st Annual Latin Grammy Awards. Cuban dance music is back! Leading an all-star Latin big band, Grammy Award-winner Paquito D'Rivera unleashes the beloved music of his homeland. Following in the tradition of Havana's immortal jazz orchestras, D'Rivera infuses his own stylings with mambo, son, danzon and bolero to create an essential musical document. Tropicana Nights lures you back to the renowned nightclub's open-air terrace, "Bajo Las Estrellas," where the jet-set flocked to hear Cuba's great jazz orchestras and experience the spectacular floor shows. In keeping with the club's festive spirit, the album opens with the exuberant "Mambo a la Kenton" (penned by the club's musical director, Armando Romeu, Jr.). If that doesn't get you dancing, the irresistible rhythms of tracks like "Chucho" (a joyous mambo) and "Old Miami Sax" will. And when your feet need a brief rest, timeless ballads like "Como Fue" caress your heart. D'Rivera's passion for his native music is sustained throughout, from his soprano sax solo on the title track (a perfectly-crafted tone poem), to the celebratory call-and-response of "A Mi Que/El Manisero," which features noted Spanish vocalist Lucrecia. His affection for these songs springs from the childhood nights he spent in Havana clubs with his father, Tito, himself a well-known classical saxophonist and jazz orchestra conductor. "Through my father, I learned to love these types of orchestras, and that's why I chose to use the sound of those bands as a point of reference in this project." D'Rivera's mastery of the clarinet and soprano and alto saxophones is rounded out by extraordinary performances from top Latin musicians like Ralph Irizarry, Oscar Feldman, Milton Cardona and Jimmy Bosch. From his groundbreaking influence in Irakere to his Grammy Award-winning Chesky album Portraits of Cuba, D'Rivera has carried the spirit and joy of Latin Jazz music everywhere. Come join him on an unforgettable musical journey back home.