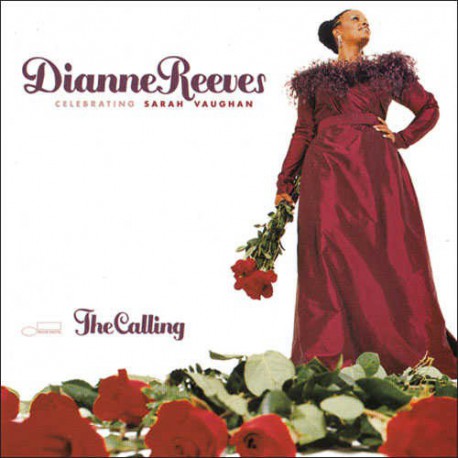 In addition, the vocalist surrounded herself with a 42-piece orchestra composed of L.A.'s top studio musicians, which recorded live with her. That's what The Calling is about: to celebrate the spontaneity and spiritual force of Vaughan's art. Prod by George Duke.

"I'd never heard a voice like that, that could soar, that was so rich and deep and beautiful, that sang all over the place. It was like magic, to be able to phrase and improvise like that. I thought, 'You mean there are those kinds of possibilities?' So in the very beginning of my vocal development, I viewed her as my vocal guide and inspiration."

- Dianne Reeves on Sarah Vaughan.
"Reeves' singing abilities can't be denied here. She scats with aplomb, carries the bottom end the way [Sarah] Vaughan did and swings with a drive reminiscent of Ella Fitzgerald."
- Down Beat

"'The Calling' showcases a radiant talent who is at the top of her game."
- Washington Post

"Reeves, with her lively scatting and multi-octave voice, never tries imitating the great singer [Sarah Vaughan]. She provides a fresh take on each song, luxuriating in the music provided by such musicians as George Duke, Billy Childs, Reginald Veal, Russell Malone and Clark Terry, in addition to a 42-piece orchestra."
- USA Today

"Ms. Reeves stays perfectly on pitch, and her notes, individually packaged like Valentine chocolates, have a perfect roundness. Like [Sarah] Vaughan she has the high technique that you don't really miss in other singers until you hear her perform."
- New York Times

"Reeves is, in every sense, a jazz musician. Her voice - among the most fabulous around - is her instrument, and she improvises both in lyric and melodic delivery on every selection. Combining an amazing range and rich, full contralto with what old hipsters called 'good ears,' Reeves is capable of presenting as exciting and imaginative a jazz performance as any other great instrumentalist." - San Francisco Chronicle

"One question I am always asked: Who is the next Billie, Sarah, Ella, Carmen or Lena? I can now answer in two words: Dianne Reeves. She sings and swings like all of them put together. Sultry, savvy, unique, adventurous, with a range that flies off the Richter, she's the hottest thing in jazz."
- Rex Reed, New York Observer

"There isn't a weak track on this impeccably sung tribute."
- Entertainment Weekly

"Reeves is definitely one of [Sarah] Vaughan's logical heir apparents - and this comprehensive CD represents an excellent and necessary addition to her estimable body of work."
- Boston Globe

"Recorded with a live 42-piece orchestra in a scant four days, 'The Calling,' has the immediacy and intimacy of a late-night supper club. And that's the perfect setting for Reeves' warm, expressive vocalizing. With this album the sublime jazzist revives interest in one of jazz's greatest singers, and she establishes herself as one of her mentor's rightful heirs."
- People Magazine

"Dianne Reeves will always be in vogue. Or at least she should be. A gifted singer from Detroit, Reeves is a contemporary talent with classic sensibilities."
- Savoy Magazine