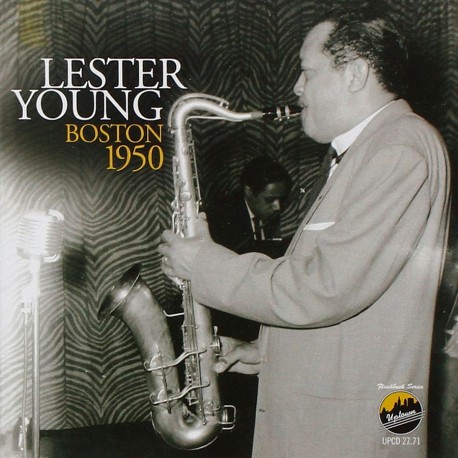 Uptown Records has recently come out with LESTER YOUNG -BOSTON 1950, a full CD of music recorded by Pres live at the Hi-Hat in Boston. Not one tune has been previously issued (these sessions aren't even listed on discographies!!) and most of them (14 out of the 16 tracks on the disc) were recorded in 1950, a good year for the saxophonist, who was still in full control of his talents and hadn't yet fell into the solo routines that characterized most of his last years (he would die in 1959).
The present broadcasts present him in a quintet format with his usual partner trumpeter Jesse Drakes, brilliant pianist Kenny Drew, bassist Joe Schulman, and Modern Jazz Quartet drummer Connie Kay.
Among the many highlights here are versions of tunes Young rarely recorded, such as "She's Funny That Way", "Body and Soul", and "You Can Depend on Me", plus his only known reading of Frank Loesser's "On a Slow Boat to China"!!
The last two tunes find Pres again at the Hi-Hat but three years later, in 1953, again with Drakes on trumpet and Connie Kay on drums, but with Horace Silver at the piano.
Given the broadcast nature of the performances, some tunes are incomplete, but sound quality is very good all throughout, and the musical quality is outstanding. A real find. - From the Liner notes