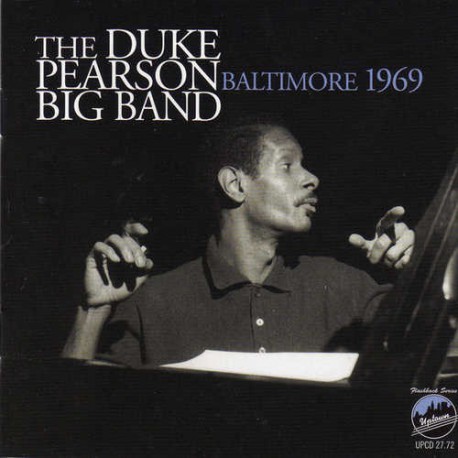 Uptown Records has recently issued yet another previously unknown jewel which must be added to the many they have unearthed so far. The Duke Pearson Big Band -Baltimore 1969 (UPCD 27.72) presents a never before heard formation of Pearson's orchestra.

The pianist had first presented his big band in late 1967 on a Blue Note LP. Great musicians who were on that and subsequent recordings by the band, such as Julian Priester, Frank Foster, and Pepper Adams, are still here, as well as the wonderful rhythm section consisting of Pearson himself on piano, Bob Cranshaw, and Mickey Roker on drums, but to them we must add on this live set non other than Donald Byrd on trumpet (featured notably on "Eldorado") and Eddie Bert on trombone.

Furthermore, this relaxed live setting presents long performances of eight numbers which allow the soloists to stretch out, and even presents some numbers which are unique in Pearson's complete discography, such as his only known versions of the brilliant Pearson arrangements of Randy Weston's composition "Hi-Fly", and Cole Porter's "In the Still of the Night" (the later showcasing a lengthy and glorious solo by Pepper Adams).