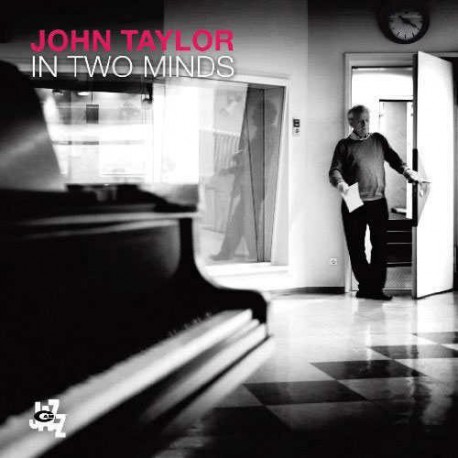 John Taylor and his two minds. A cryptic title for the new work of the English piano player, which was released a little more than one year after his previous recording for CAM JAZZ, “Giulia’s Thursdays”. This is a concise album, for piano only (or at least so one might assume), in which Taylor bares himself, revealing two sides of his personality: his innermost, quiet and introspective side as opposed to his more lively, vivid, and cheerful side. Are these his “two minds”? A quite regular alternation of pieces in opposite moods seems to confirm this assumption. The enigmatic words with which Taylor comments on his album lead to the same conclusion. But, certainly, that’s not all. It’s not by chance either that Taylor talks about being “in two minds whether to make this recording a solo or a duet project”. Or that he uses the words “balance”, “timing”, and “to play (at the same time)”. The weird, innovative idea in “In Two Minds” is the use of two pianos to make the two tracks interlock, overlap, and match perfectly. Thus, one can delight in guessing and discovering where this comes true, starting with the long “Ambleside Suite”, nineteen minutes of outstanding music that captivate listeners right from the beginning. A piece that prepares them to travel through the other six pieces on the album, minor, though not less shiny, gems. All of these compositions bear Taylor’s signature, except for “Phrase The Second” by his friend Kenny Wheeler and a tribute to Duke Ellington, “Reflections In D”, that virtually closes the album.