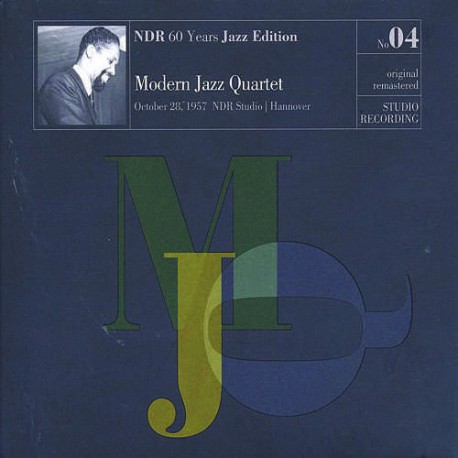 By the time the Modern Jazz Quartet made a stop at the Lower Saxony regional broadcasting station of the Norddeutscher Rundfunk in Hanover on the 28th of October 1957, the band was already a phenomenon on the jazz scene – here in Europe and in the USA. Four black instrumentalists – John Lewis on piano, Milt Jackson on vibraphone, Percy Heath on double bass and Connie Kay on percussion – played a kind of jazz music whose smouldering fire and subtle swing did not quite match the idea that people in post-war Germany had of the improvised music from the United States.

From a present day point of view, this somewhat different studio session with the Modern Jazz Quartet is a special opportunity to gain a new perspective on the contribution of this quartet to jazz history. Because, unlike the concert recordings from this European tour (for example in Donaueschingen shortly before the studio date in Hanover or the Gürzenich in Cologne on the 9th of November 1957), these approximately 30 minutes make one thing clear: how well prepared and professional the four MJQ musicians were in what was not an everyday task for them, to reconstruct in the isolation of the sound studio one of their concerts (without an audience) – including Lewis's explanatory commentary. And also how well they were able to work with the technical crew of the Norddeutscher Rundfunk – always at eye level, without airs and graces.