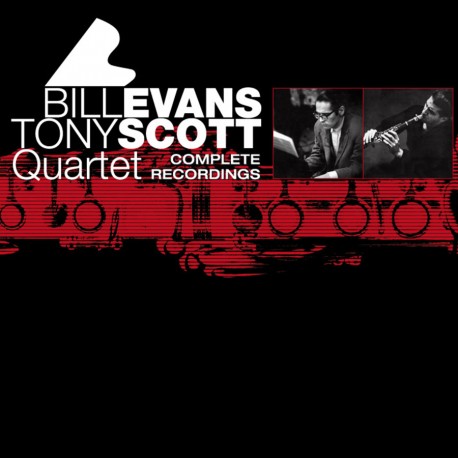 All known quartet performances by Bill Evans with Tony Scott on clarinet reunited here for the first time ever on a single collection. A very interesting combination, their collaborations mixture very melodic and lyrical moments with more adventurous and advanced improvisations related to the various styles modern jazz was experiencing during those years. Featured here are splendid jazzmen like Jimmy Garrison, Scott LaFaro, Paul Motian and Pete LaRoca. As a bonus, Evans and Scott’s only two clarinet-piano duets, as well as a Bill Evans trio selection that completes their August 1959 quartet session.

TONY SCOTT clarinet
BILL EVANS piano
on all tracks, plus

The recordings gathered on this collection were made during a crucial period in Bill Evans’ career. After making his professional recording debut in 1953, he would record the first album under his own name on September 27, 1956, titled New Jazz Conceptions. The album would lead to a series of recordings both as a leader and as a sideman for different musicians. As his own projects developed, his role as a sideman began to decrease. However, in 1959, when the last of the sessions here were recorded, Evans was making history with the Miles Davis Sextet taping the classic album Kind of Blue. The recordings here, thus, mark a kind of transition between the pianist influenced by Bud Powell and George Shearing – with multiple single line improvisations with his right hand – and the more restrained modal one which evolved around the period of Kind of Blue. Evans and Tony Scott worked together a lot from 1956 to 1959, when the clarinettist departed to Asia and then to Europe, where he would live for many years. This release comprises all of their quartet recordings, along with a single Bill Evans Trio track from their 1959 Showplace set, and a couple of clarinet/piano duets from their October 1959 sessions.