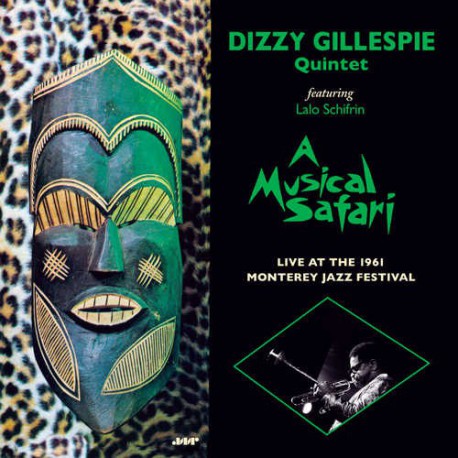 This set presents Dizzy Gillespie’s complete set at the 1961 Monterey Jazz Festival. While humorously presented by Diz as “A Musical Safari”, the set is a mixture of the repertoire the quintet was playing in those days, including an excursion into the realm of bossa nova. By 1962, and especially after the appearance of Stan Getz & Charlie Byrd’s Jazz Samba, a true bossa nova craze had started in the United States. It wouldn’t be fair to say that Dizzy jumped on the bossa bandwagon as a commercial move. He had been among the first to combine Latin (and above all Cuban) rhythms with jazz in the mid-1940s, adding spectacular conga drummer Chano Pozo to his band, and he toured South America extensively, playing with as many talented musicians from every possible style as he could find. Always interested in exotic rhythms from all over the world, Gillespie embraced Lalo Schifrin when he met him in Buenos Aires, and asked him to compose for his band, but also to arrangepieces from other composers. Best known for his film and TV scores, Schifrin (born in Buenos Aires, Argentina, on June 21, 1932) began as a jazz piano player. Schifrin’s life would dramatically change after Dizzy Gillespie’s visit to Argentina.