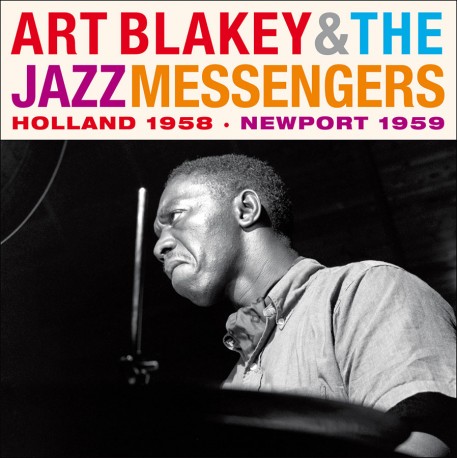 Presented here are two complete rare concerts by one of the best formations of Art Blakey’s Jazz Messengers, with Lee Morgan on trumpet, Benny Golson and Hank Mobley alternating on tenor sax, Bobby Timmons on piano, Jymie Merritt on bass, and the leader on drums. The group with Golson lasted for less than a year and produced very few recordings. Mobley’s 1959 stint with the group lasted even less, as he was soon replaced by Wayne Shorter. The concert on CD1, recorded in Scheveningen, Holland in 1958, and featuring Golson, was only previously available on a long out of print Japanese edition released 20 years ago. The Newport ’59 set with Mobley which opens CD2, on the other hand, has never been issued before!

This release is completed with all of the existing music from the Messengers’ (with Golson) performances at Paris’ Olympia Theatre in 1958, during the same tour that produced the Dutch concert.